Code Zero's for racing and cruising

Many modern yachts whether they are designed for racing or cruising tend to be equipped with reduced area or non-overlapping headsails that are very convenient and easy to handle but unfortunately make light air sailing, particularly when just off the breeze very slow and tedious. This is perhaps more of an issue on cruising boats where the single furling headsail will be a lot heavier than the equivalent found on a race boat. Even in more traditional boats with large overlapping genoas the sails tend to be so heavy that in light airs they just sag and do very little. A Code Zero (racing) or FFR (cruising) is the ideal solution for the discerning sailor who wants to maximise the yachts potential in light airs and have more control at wider angles as the breeze builds. 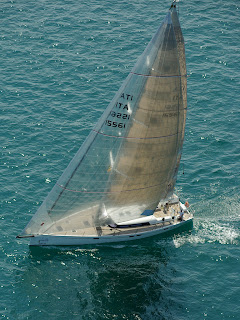 A Code Zero for racing purposes under IRC has to rate as a spinnaker which places restrictions on the geometry of the sail; essentially its mid with must be wider than 75% of the foot width. This in turn places constraints on how flat the sail can be.

The OneSails FFR (flat furlable reacher) is a cruising version of the Code Zero. Because it isn’t constrained by any racing rules they are actually more efficient at closer angles to the wind than their race oriented cousins.

Both the Code Zero and the FFR are considerably flatter and smaller than their downwind oriented counterparts. The tack of the sail is usually attached to a point just forward of the base of the forestay or perhaps to a short bowsprit or prodder. There is plenty of precedent however, particularly on cruising boats for them to be tacked to a strong point just behind the forestay and set on a short strop so that the sail is set clear of the guardwires.  They are designed to be flown with a taut luff which enables them to be used with a dedicated free flying furling unit which in turn makes them relatively easy to hoist and drop though many racing boats will choose to launch them in the same way as a conventional spinnaker. Both sails are usually constructed from a dedicated ‘Code-Zero’ style laminate though on smaller boats ripstop Nylon is often used as a less price sensitive alternative. 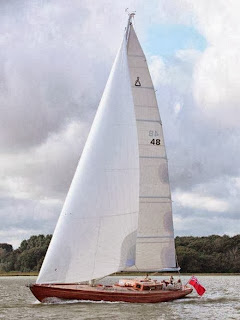 Both the Code Zero and the FFR can be thought of as very versatile sails. Although they are designed primarily as close winded sails they can be used in other ways too. In less than around 5 knots TWS it is possible to sail as close as 50 degrees TWA which is pretty well as close as the boat would sail with its regular headsail. The difference is that the sail is bigger and lighter so the boat performs better. As the breeze builds the sail is used at wider angles as the luff begins to sag and the boat starts to get powered up. In 10 knots TWS the sail would typically be used on a beam reach when the boat would be underpowered with the regular jib but overpowered with a full sized spinnaker. The same principles apply as the breeze builds further; the sail gets used at wider angles down to a maximum TWA of around 130 degrees but by this time a dedicated downwind oriented sail would probably be more stable.

In summary they are practical, easy to handle sails whose all round versatility makes them a welcome addition to most sail inventories, regardless of the end use, racing or cruising.

Quotes:
Just a quick note to tell you how pleased I am with the new FFR that you made for Albatross (She 36). It has transformed our light air sailing which was evident with reduced fuel bills on our recent cruise to La Rochelle in hot weather with little wind. It helps that it is so easily handled with the furler so it can be set or furled on a whim. On the leg from Ile d'Yeu to Ile de Re we were getting 7+knots with a 9 knot beam wind - magic - especially as it was faster than the engine would have given us....! (Richard B, Hamble)

The Code Zero was the secret weapon (at Giraglia 2013). It had a much better range than I had expected and was extensively used. So thank you for making it at such short notice....(Mike G, Swan 56)

Posted by onesails gbr south at 15:19