I recently took a call from someone who couldn’t seem to get his boat to point as high to windward as other boats around him despite having bought new sails (from another sailmaker). The owner was smart enough to take some photos so that we could make an objective judgement and although the sail shapes themselves were a little different to what we would have made they weren’t exactly bad and it was clear that the sails themselves were not the real cause of the problem.  So where did that leave us? Well, what the photo’s did reveal is that they weren’t being trimmed very well, despite the owner having somebody onboard that he regarded as his racing expert and bit of a guru! 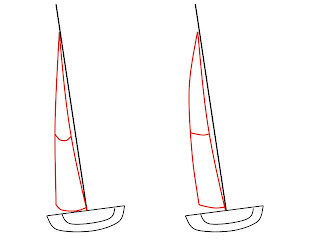 Headsail trim: the genoa car for the sheet lead was set far too far forwards resulting in a sail  that had a very tight leech and was setting up much too deep for the conditions (see the left hand image in the sketch on the right). If the car is too far forwards the bottom of the sail cannot be pulled flat and the excessive leech tension means that the sail is too full generally. With the car set further aft in its correct position the foot of the sail is flatter, the leech profile is more twisted and the sail is starting to do the job that it was designed to do (right hand image in the sketch). Incidentally, the ‘base’ position for the genoa car should be such that an imaginary extension of the sheet itself roughly bisects the luff of the sail. 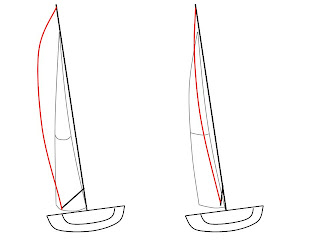 Mainsail trim: the sail was set with the boom well down from the boats centreline and with far too little leech tension, in fact the complete opposite to how the genoa was set! (See left hand image in the sketch on the right).The lack of leech tension means that the sail has a very twisted leech profile with the top of the sail falling well to leeward. The top half of this sail will appear rather flat. The boat can’t possibly point in this mode, particularly when the genoa leech is set in a way that is a stark contrast to the mainsail. The solution is to keep the boom closer to the centreline and use more mainsheet to set the leech profile with a tighter leech (right hand image in the sketch).

With the sails set correctly for the conditions this owner would have seen an immediate and significant improvement to his upwind performance. His original set up meant that neither sail was working very well and the overall aerofoil that the wind was being deflected around was particularly inefficient. Bear in mind however that there are no ‘magic’ settings; sail trim is dynamic and the sail shapes need to change as conditions change. Trimmers need to be aware of the shape of the sails at any moment in time and they need to be aware of the fact that the various trimming aids (sheet tension, lead position, halyard tension etc) will have a significant bearing on the shape of the sails and how the boat subsequently performs. Be aware of how the boat is performing and be prepared to change something if you are not going as well as you’d like! If another boat near you seems to be doing better can you learn anything from how their sails are trimmed relative to you own?

Posted by onesails gbr south at 10:51